ShipIt V: Return of the ShipIt 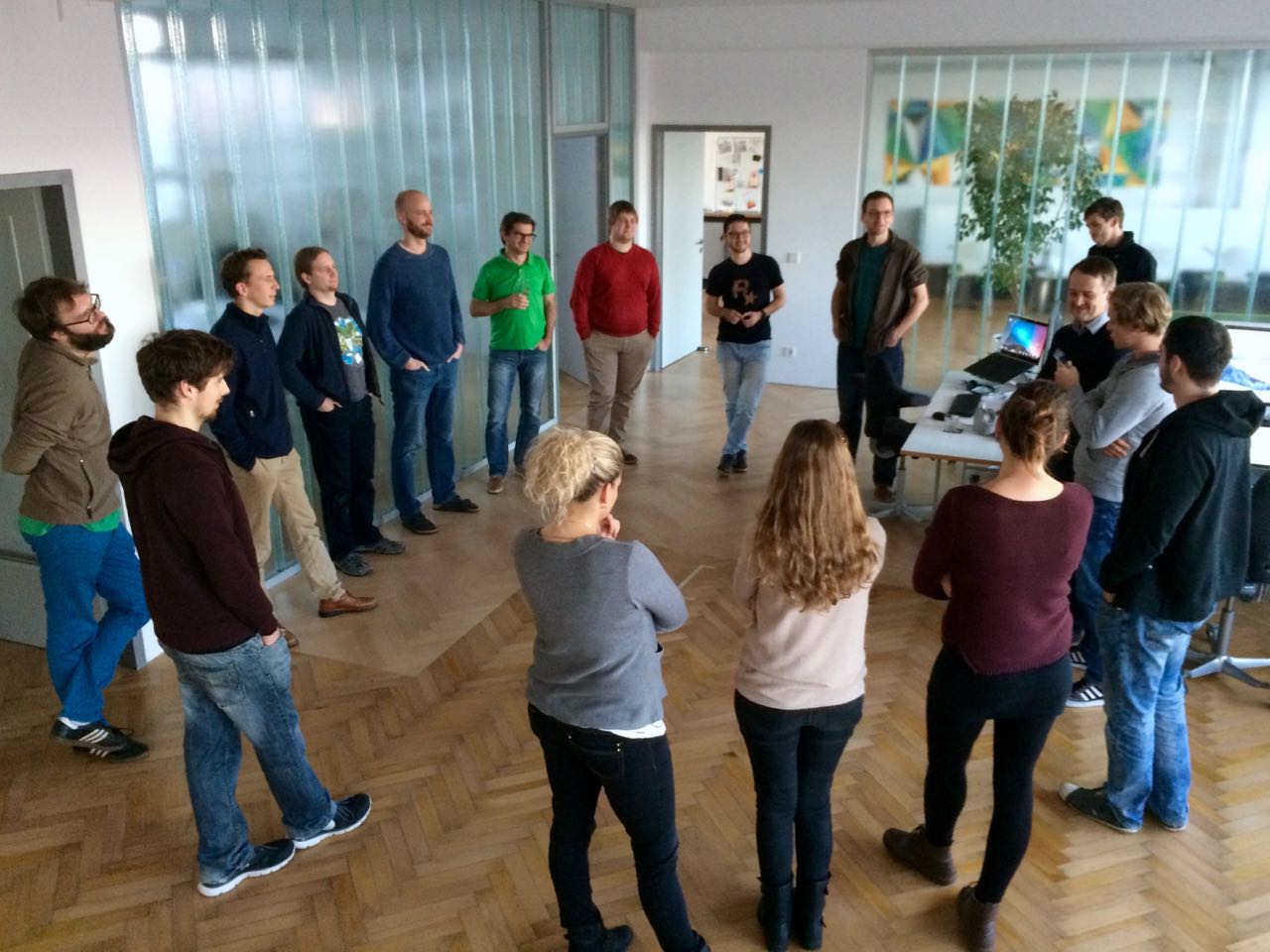 K15t Software's fifth Atlassian-rules 24-hour hackathon happened just before the holidays in 2015, and the dust has finally settled enough for us to tell the tale. We had a wide range of projects this time around and, it must be said, a really impressive bunch of results. Being that we're a software company there were a variety of software-centric projects, but it wasn't only the developers in the race. Everyone got involved, and a snapshot of the awesome stuff they did is below.

There were many stellar projects, and it was a close race, but in the end, the ladies of K15t took home first place with their incredible transformation of our kitchen's storage area. Congratulations to Denise, Sarah, Victoria and Anja on an amazing job!

The clock is ticking... 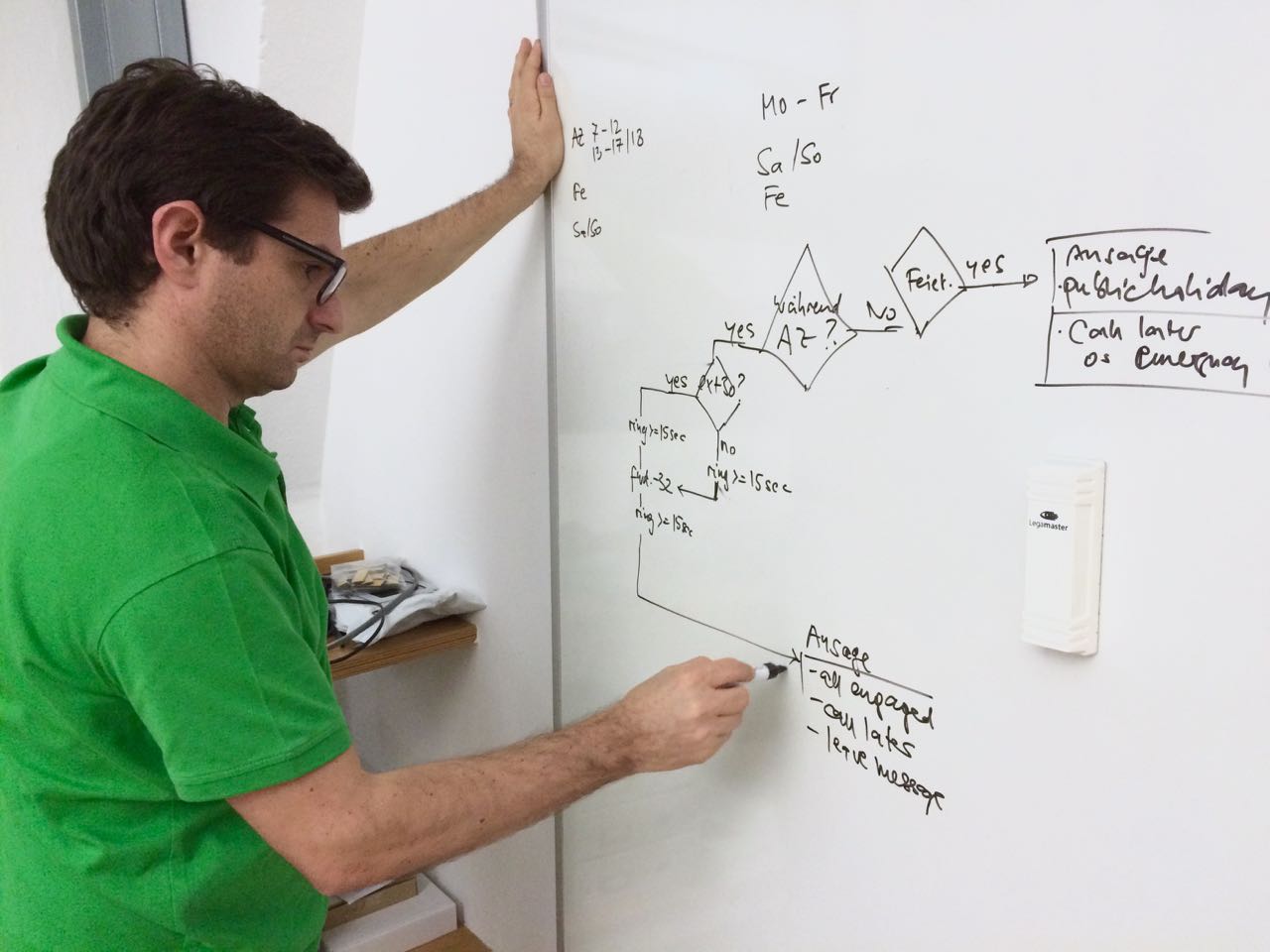 ShipIt kicked off on a Thursday at 4 pm with a huddle where the teams announced their projects. As soon as the talk wrapped up the teams scattered all over the office and dove in. ShipIt is a chance for everyone to step back from their daily work and show their creative chops. The rules are simple: Work with others or alone, build something (anything) great, and present it in working form just 24 hours later. It's a tight timeline, but our teams and even our solo-flyers once again rose to the challenge and delivered.

Put your money where your mouth is 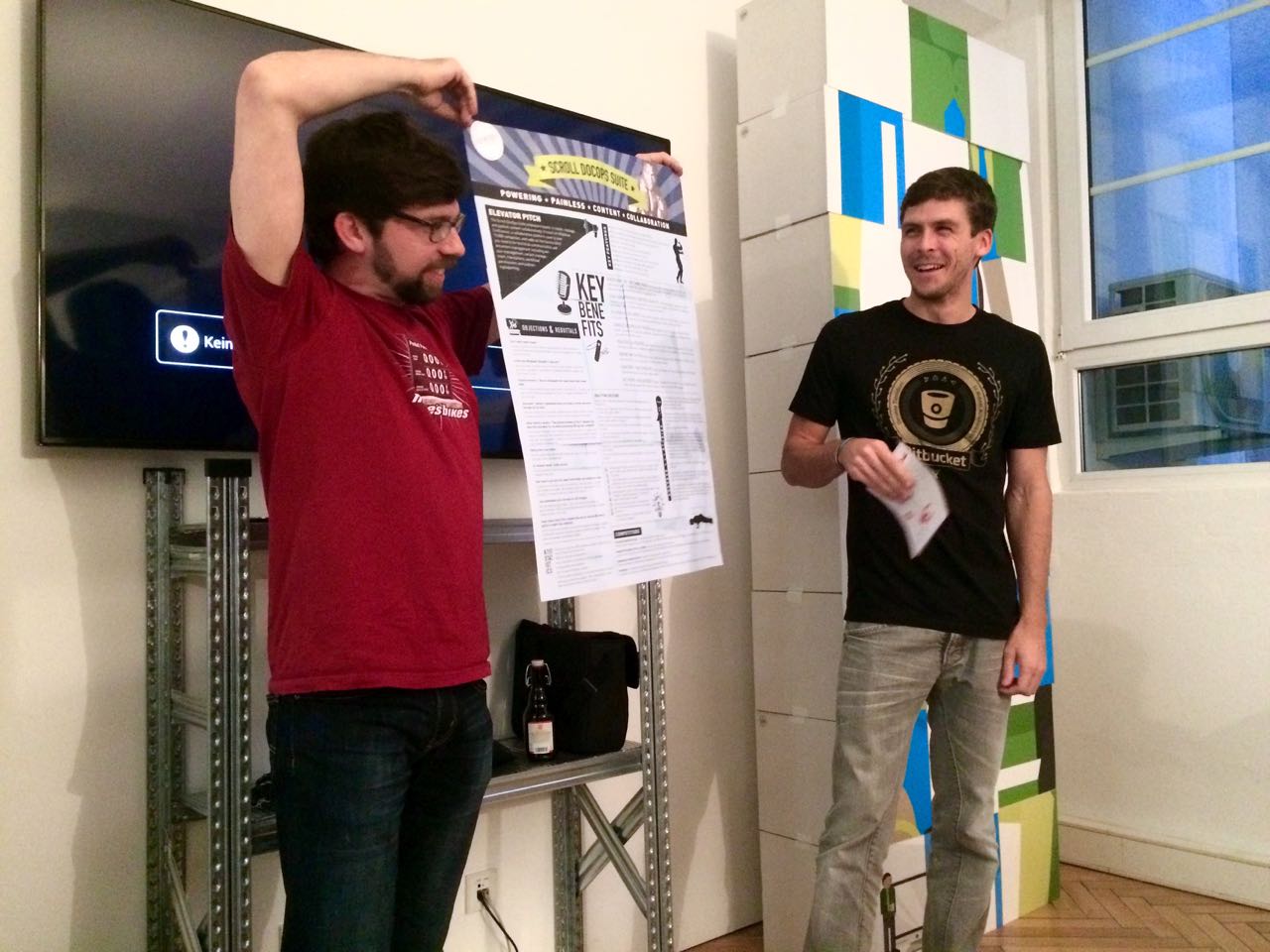 After 24 hours, everyone got together to present their projects. Some people were done early, others (like Davin and Nils above) barely made it into the room with everyone counting down the final ten seconds. The rules are firm and disqualification is merciless: be ready to present at deadline or you're out! The presentations follow, with each team given five minutes to present what they did. 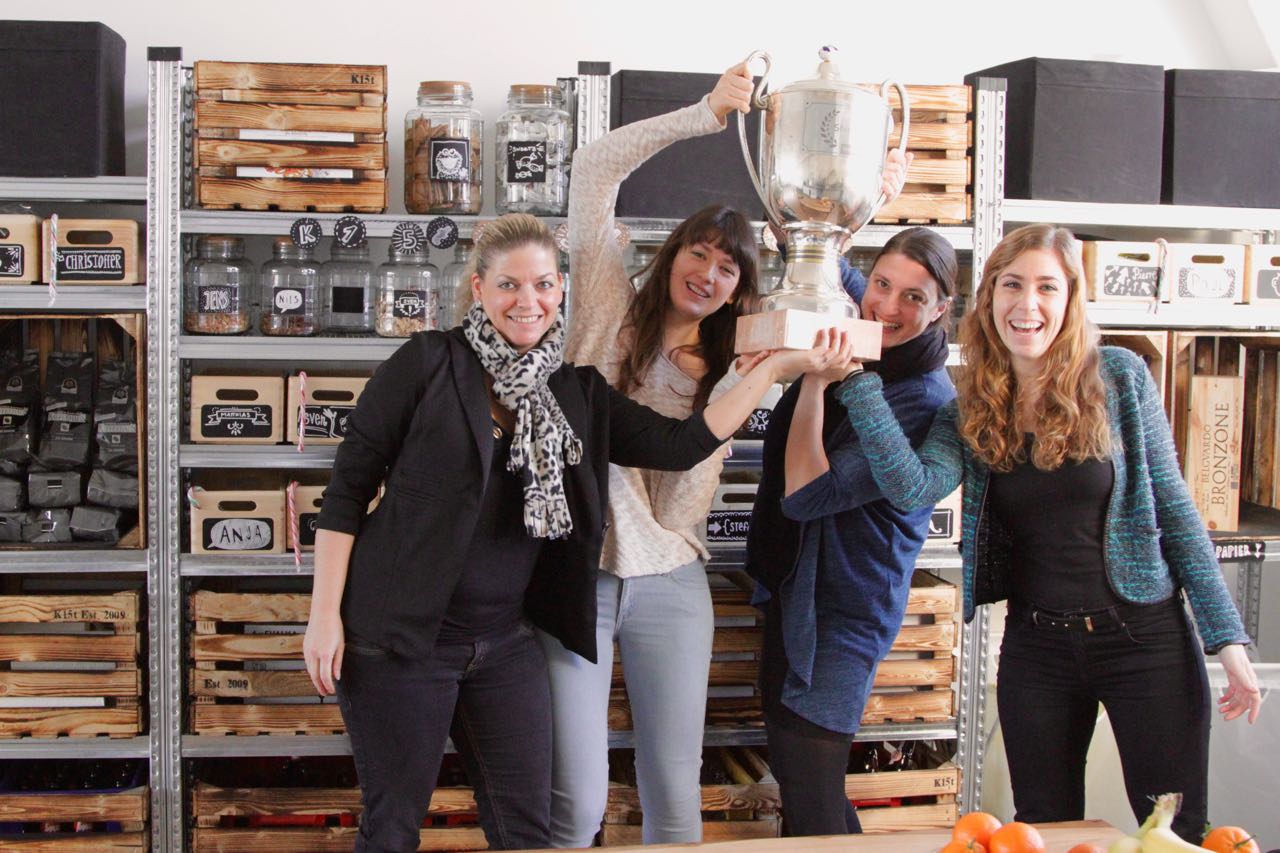 After the presentations were done, everyone got to vote for their two favorites. A tough call, for sure, with so many awesome projects on display. When we were tallying the results there was much "ooooh"-ing as our top two teams remained in lockstep until the very end. The ladies of K15t pulled ahead and won – and with good reason. Denise, Sarah, Victoria, and Anja will be immortalized with their names inscribed on the big ShipIt trophy here in the office for their efforts.

The ladies completely transformed a significant chunk of our kitchen, with personalized boxes for every employee, gorgeous custom storage crates with "K15t, Est. 2009" stenciled into them, and more. A lot of us here in the office like to start out day with a bowl of muesli, and now everyone has a personalized jar to store theirs in. The team even attached a bottle opener to our fridge, with a magnet underneath to catch the caps perfectly – no wonder that they came out on top. 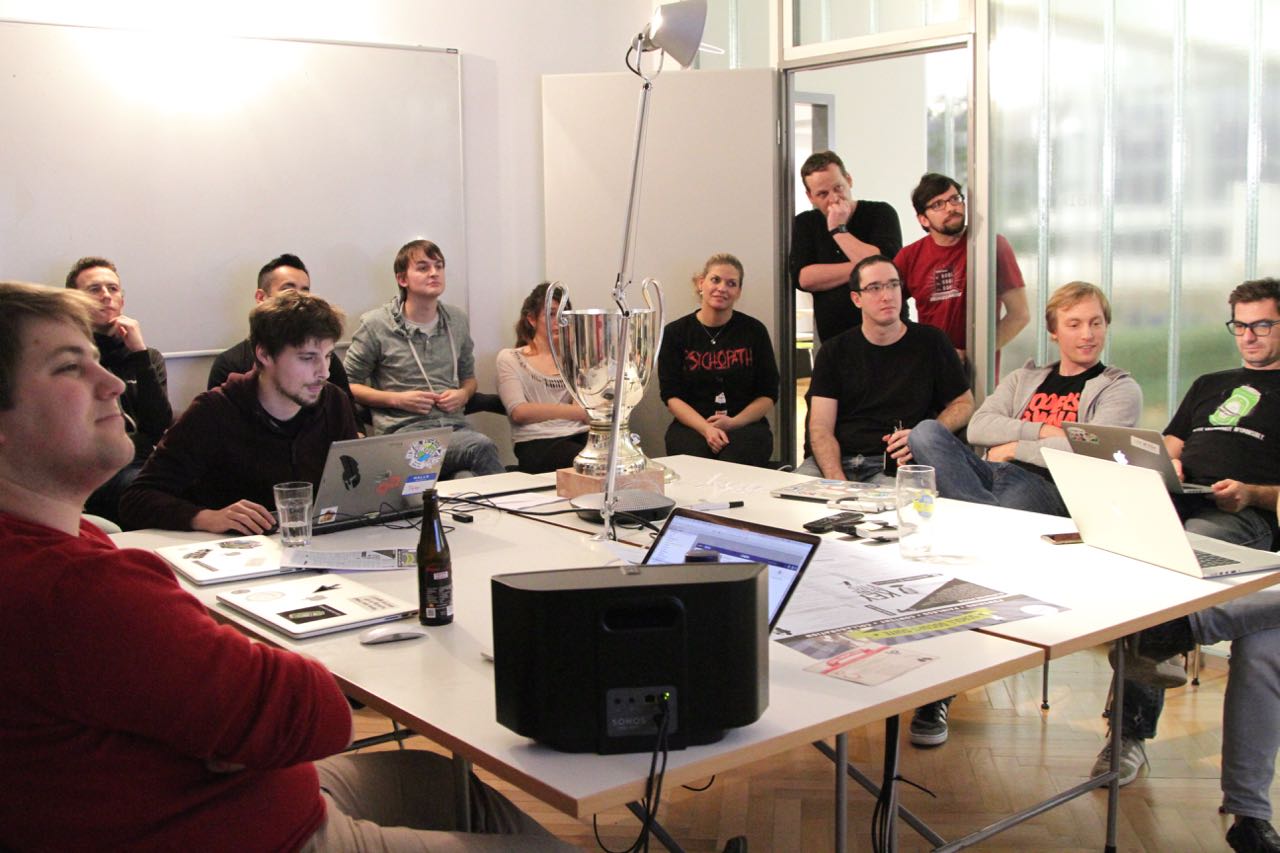 This project very nearly won it all. Roman and Matthias built a system based around a neat little Flic Button on the wall of our office. When held down, it sends a color-coded report of all K15t Software Add-on sales in the last 24 hours to a special HipChat room. Users can also request the information directly at any time. That's not even the coolest part, though. If the button is pressed, it announces the sales data of the two highest-tier products sold in the last 24 hours. With sound effects based on how big the sales were: a fanfare if they were awesome, a sad-trombone sound if they weren't so great, etc. Roman and Matthias provided the voices for their demo, but phase two will involve recording the voice of everyone in the office to be selected randomly every time the button is pressed.

Their demo resulted in Roman's voice ringing through the office for quite a while as everyone wanted to take a turn pressing the Notificatus button. 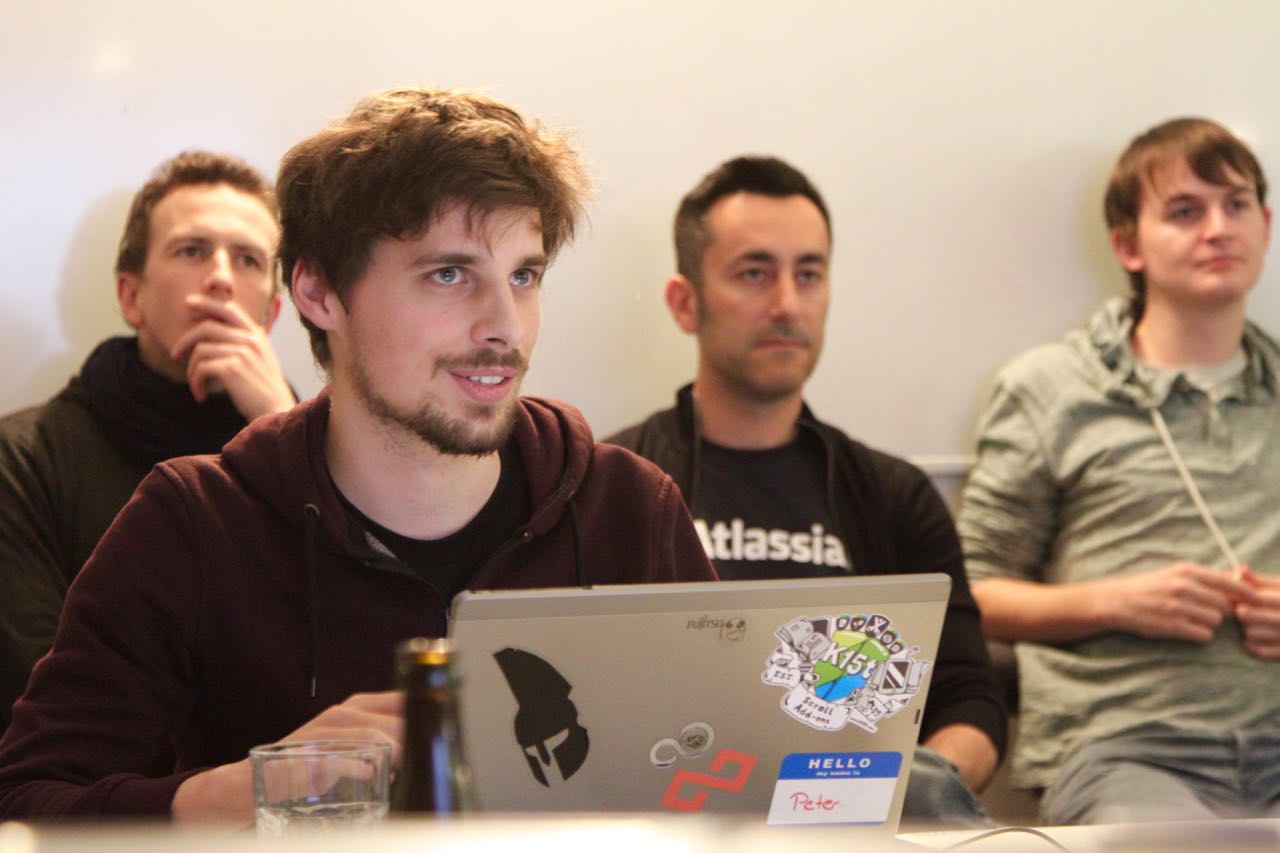 For the third time in a row, Peter earned a place at the ShipIt podium, this time with his souped-up version of Scroll Translations. We think translations is pretty awesome already, but not awesome enough for Peter. To translate content, you need a translator or a service to work with both the original and target languages. But what if you need a quick translation and don't have an expert on hand? Peter's ShipIt project enabled instant translation of text (including styled text and macros) in Confluence pulling from Google Translate. He demonstrated by translating a test page from German to English, Spanish, and Russian with just a few clicks. We all liked this so much that we might just add this feature to Scroll Translations in a future release.

There were a lot of other very cool projects. Christoffer created a way to control Confluence using an in-browser command line with tab completion, making tasks that are performed over and over, like publishing a space or installing licenses, quick and easy. Sebastian and Pierre put together a plugin for cloud-based JIRA instances to allow users to duplicate an issue, editing it as necessary and copying whichever subtasks they want from the original. This is a massive boon for creating related or recurring issues with similar or identical subtasks and other data. As for me, I decided to take a more hands-on approach to ShipIt. We had a small, largely-unused room in the office with rather unpleasant acoustics. I applied my passion and training in audio production, built ten acoustic-treatment panels, and mounted them on the walls. I also set up a spring-loaded mount arm with a very nice microphone and pop shield. Presto – K15t's new recording/webinar room!

Once again the whole staff of K15t Software had an absolute blast with ShipIt. It will definitely continue to be a core part of our culture. With so many creative and impressive entries, we'll keep having to step up each time we do it and raise the bar higher. The good news is the ideas are already flying and many of us are already planning our next projects. . .