Technical writers and authors typically don't copy-paste content between pages or different docs – they avoid replication of content whenever possible by reusing existing content. Scroll Versions extends Confluence's basic reuse capabilities by providing an enhanced Include Page macro named Include+, which has grown more powerful in the latest release.

As seasoned Scroll Versions users already know, until now, the versioning of content and the usage of the Include+ macro was limited to the same space. Reusing a versioned page in two separate spaces required storing the content in both spaces, which causes duplication. Alternatively, you could use Confluence's own Include Page macro, but only if the included content wasn't versioned or translated. Both of these approaches were workarounds asking for a dedicated solution.

The solution comes with Scroll Versions 3.11, allowing you to reuse content from other versioned or translated spaces after mapping their corresponding versions or languages. Here's what it looks like:

As an author, you can now select which space you want to include from using the Include+ macro: 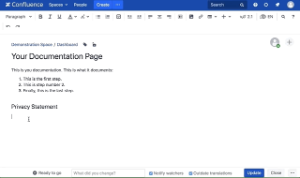 As a DocAdmin, you can now add spaces to the Include Library located in the Space Tools and thus make them available to be included from. When adding a space, mappings for both versions and languages are configured: 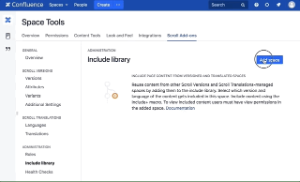 Want to learn more about content reuse in Confluence?

3 Ways to Benefit from the New Include+

The possible use cases for content reuse across spaces are very diverse, so let's have a look at three:

Get the Latest Version

If you want to benefit from these updates – and reuse versioned or translated content in Confluence more effectively than ever before – you can update to Scroll Versions 3.11 directly from the Atlassian Marketplace. Existing users can upgrade for free, and new users can try Scroll Versions free for 30 days.