How to View and Resolve Inline Comments in the Confluence Editor

Creating, editing, and reviewing content is an easy and collaborative process with Atlassian Confluence. You can create content on the fly, edit collaboratively, and quickly get feedback from your team.

One of Confluence's most valuable and widely used methods for providing feedback is through inline comments. Unlike page comments, inline comments allow collaborators to leave targeted feedback on specific portions of content, making it simple to review, propose, and discuss changes in context.

However, inline comments are hidden as soon as you edit a page, resulting in tedious workarounds like opening multiple tabs to view comments and content side-by-side, or toggling back and forth between edit and view mode. This costs your team time and often leads to errors in the review process, especially when reviewing long pieces of content or documentation.

Turning a Hackathon Project into a Confluence App

This issue has been bothering a lot of Confluence users – about 400 to be precise – and has been an open Confluence suggestion since 2015, so the K15t team decided it was time for a solution.

During one of our tri-annual, 24-hour hackathons known as the Hacketse, one team introduced a new way to see inline comments while editing in Confluence. The result was so popular internally that we decided to refine it and make it available to Confluence users everywhere as an app on the Atlassian Marketplace.

See and Resolve Inline Comments in the Confluence Editor

The app, Inline Comments in the Editor, helps you review feedback in context by being able to see and resolve inline comments directly in the Confluence editor.

No need to open multiple tabs to view the same page side-by-side, and no more unnecessary page updates to refer back to a single comment. This app shows inline comments in edit mode so you can stay in context as you review and edit content. Here's how it works:

All of your inline comments and comment threads carry over to edit mode, just as they appear on the Confluence page: 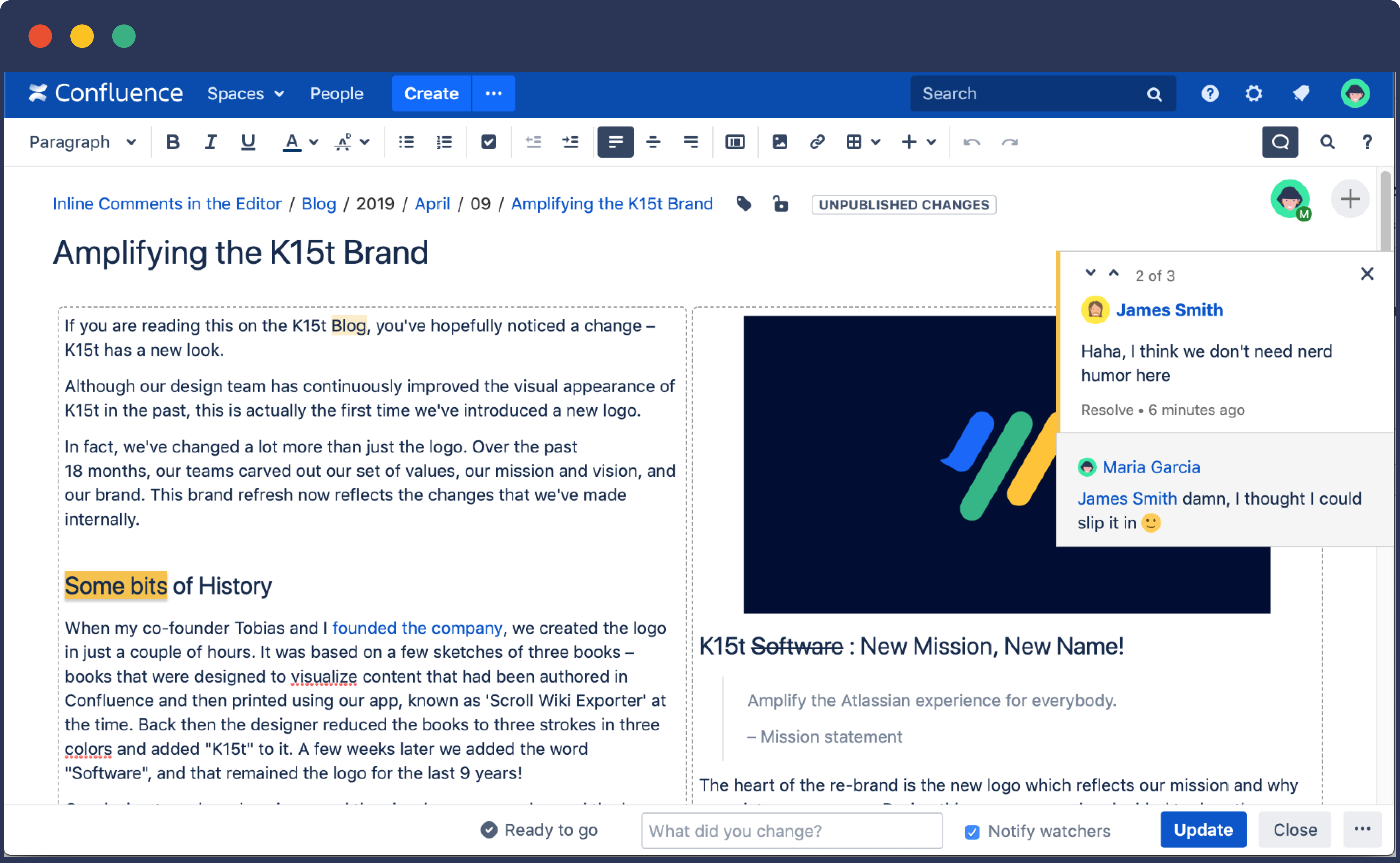 After you've incorporated the feedback in the inline comment, resolve it instantly without switching views or updating the page: 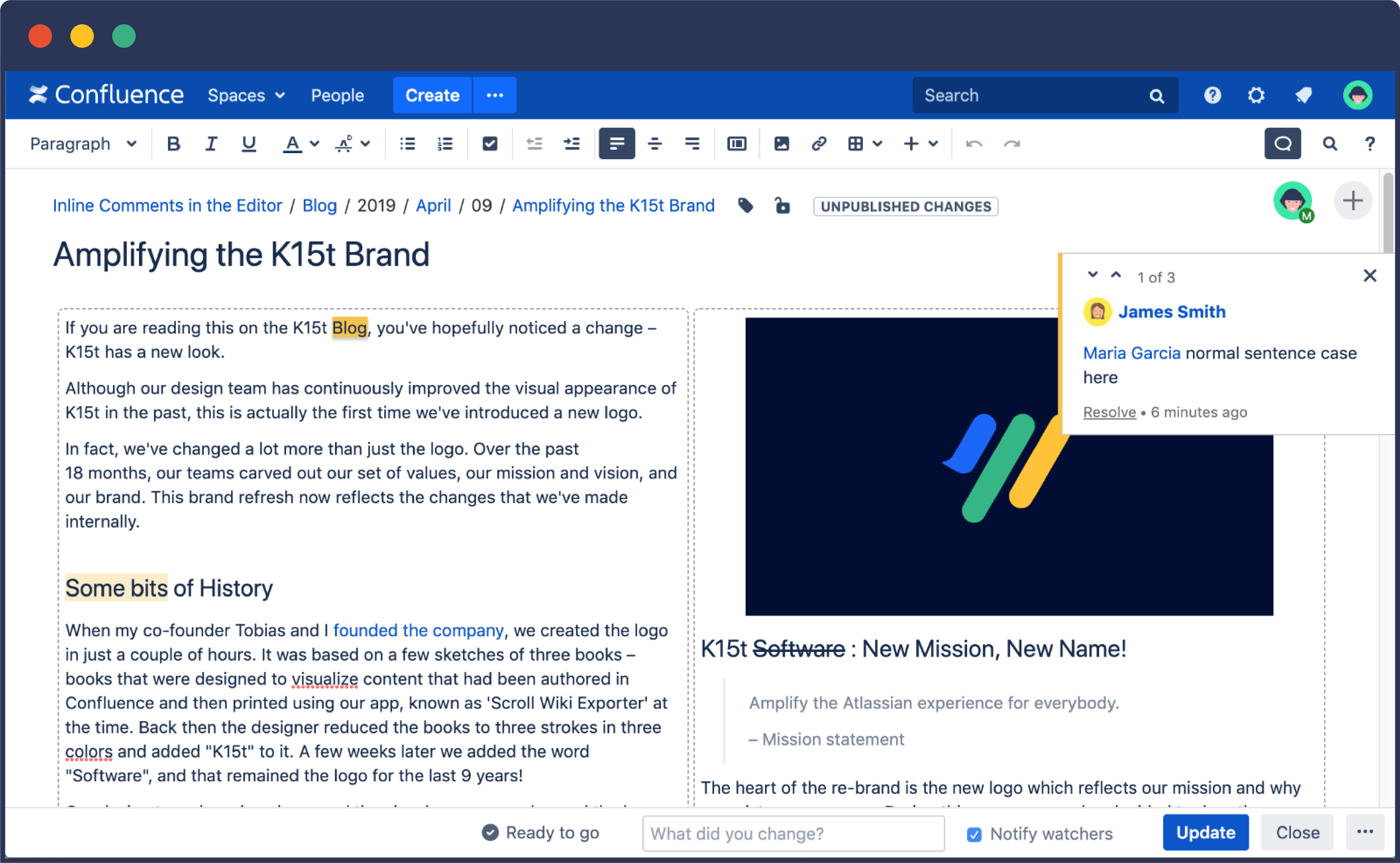 For now, the app only allows you to resolve inline comments in edit mode, but we will work to bring the ability to add, reply to, and delete inline comments in the editor in the future. Head to this page to learn more and feel free to watch and vote on these issues to get updates on their progress.

Toggle inline comments on and off in edit mode

When you need to concentrate on writing rather than reviewing, simply toggle the inline comments off by clicking the subtle Inline Comments button in the editor toolbar: 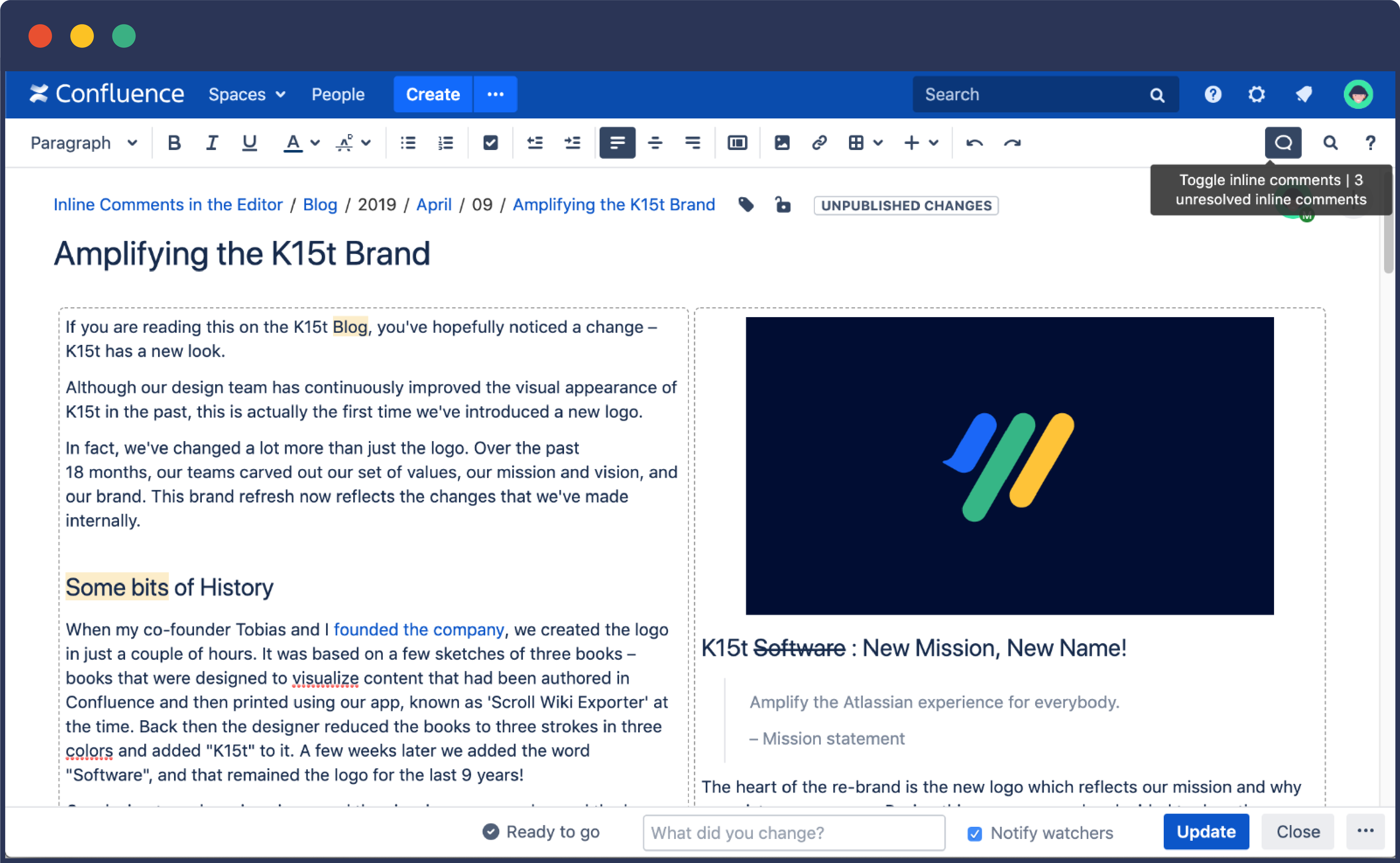 Improve Your Review Process with Inline Comments in the Editor

Inline Comments in the Editor brings simple yet powerful new functionality to Confluence and will significantly improve your team's review process. See for yourself! Head to the Atlassian Marketplace for the latest version of the app where new users can try it free for 30-days. Available for Confluence Server and Data Center.

Want to see your Inline Comments directly in the Confluence editor?